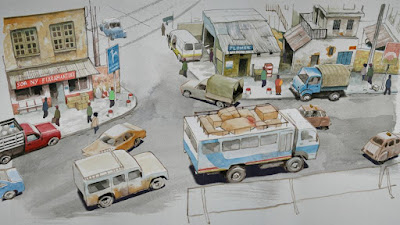 Written and directed by Bastien Dubois
Produced by Ron Dyens and Aurélia Prévieu
Editing by Boubkar Benzabat and Bastien Dubois
Sound by Cyrille Lauwerier
Animation by Pierre-Alain Dubois
A fantstic year for cinema, really a turning point in awareness. Interesting that 5 out of 6 movies that made it on this list for this year are only a few minutes long. This may be the most joyful movie that has a funeral as its centerpiece. It is a palpable celebration of the earth, people, music, writing, art, and ultimately, cinema.
It gives the viewer out of body sensations. Exciting, rhythmic journal of a voyage, including the sadness and pity at the end of a good voyage.
Yes, maybe there is some respect due to Waking Life (2001), for its animation style, but the images here, seem warmer, more loved, as if there is more reliance on the hand than on computers. The title translates from the French to "Madagascar, trip-diary".
The External World 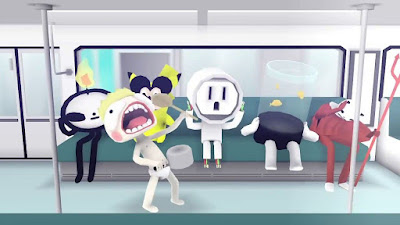 Directed by David O'Reilly
Written by Vernon Chatman and David O'Reilly
Produced by Henning Kamm and David O'Reilly
Music by Bram Meindersma
Animation by Max Stöhr and Tobias von Burkersroda
Makes you feel crazy. It's an animated short that takes you deep into the heart of evil and negativity. It doesn't glorify the evil, but it does at times find humor in it, and that is a little shocking for the audience. But it's such a novel, brilliant never-boring product that it makes you search for a way to justify it. So, you say, "You know what? I think it's a beautiful world but also sometimes it's an unjust mixed up cruel and sometimes evil world out there. And this movie reminds me of our dichotomy."
It is powerful in ways I struggle to express. It's like hearing a scream of intense pain, but with an after-taste of hope in humor and art, and ultimately a sigh of hope in the adaptability of our communication and our ability to express our desires and demands.
Oops 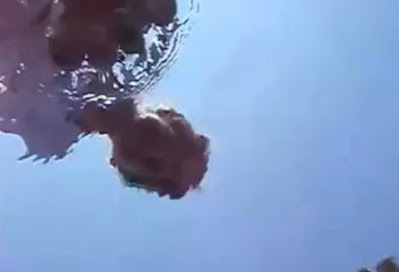 Directed and edited by Chris Beckman
Saw this movie about 10 years ago and just really haven't been able to forget it. The question that lingers long afterwards: what's the difference between when people had camcorders and everyone started having movie cameras on their phones? Did this change or add anything? Did it subtract anything? Did it make us better off or worse? Or is everything relatively the same? It gives a feeling of suspense because of the energetic editing and the sense of time hurling by.
Like, do we know exactly what we're doing? Are we flinging ourselves headlong into danger with our fascination with technology? Are we ready for this? Yes or no, it's coming. Our reckoning with all these forces is happening. It's about our fascination with our maximized ability, like a new-found super-human strength. But how to use it, and what are the dangers? And what do we risk losing? This movie, from the time when cameras on everyone's person had just became possible and trendy, is brilliant and gripping because it triggers these questions in a page-turning way.
Danny & Annie 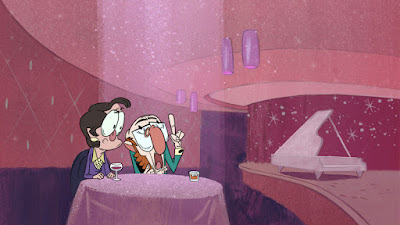 Directed by Mike Rauch and Tim Rauch
Produced by Lizzie Jacobs
Layout and design by Jim Smith
Animation by Tim Rauch
Background painting by Bill Wray
A StoryCorps project
An animated movie not for a laugh or a made-up story but to honor a real relationship. A movie to honor real love. Fantastic idea that touches heart and mind.
It took at least 3 years to make, multiple interviews.
Greenberg 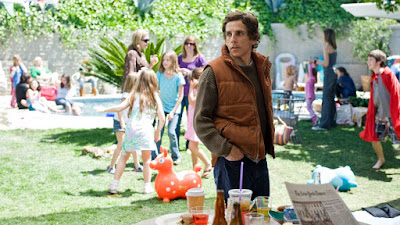 Written and directed by Noah Baumbach
Produced by Jennifer Jason Leigh and Scott Rudin
Music by James Murphy
Cinematography by Harris Savides
Editing by Tim Streeto
Production design by Ford Wheeler
Art direction by Curt Beech
Set decor by Elizabeth Keenan
Costumes by Mark Bridges, Eric Yake
and Elizabeth Abate
Hair styles by Lori Guidroz and Samantha Wade
Starring Greta Gerwig, Ben Stiller,
and Rhys Ifans
Strangely gratifying to the soul. Funny and mostly ingeniously acted and directed.
It's ultimately about two people who want to take life slow, and are mad at how quick and casual the world is, or seems to be getting. So they yearn for some kind of depth, meaning or spirituality strong enough to shield them from and allow them to operate in the material world they are trapped in.
Out of Sight 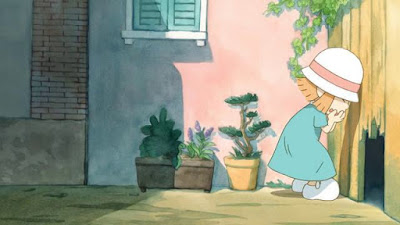 Written, directed, produced and edited
by Ya-Ting Yu
Wonderful trippy-warm adventure. Of course, the whole time, you're thinking of Miyazaki, because it owes a great deal of its thinking and style to his movies. But still, it's too delicious in its own right to dismiss.
It's about managing your life through the complicated confusing and scary series of running wheels and desire for money that people have constructed as the modern way, while still clinging to our pure innate imagination, wonderment, and possibility.