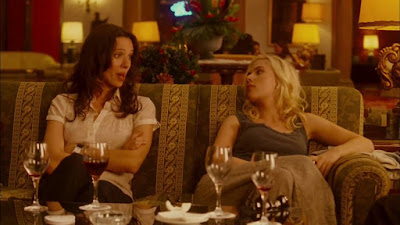 Colorful and entertaining tale of two very different American girls who meet an interesting painter while on vacation in Spain and each have a romantic episode with him.
The wild card comes half-way through with the fiery unpredictable character of Maria Elena played perfectly by Penelope Cruz. She is clingy, manic, and volatile, but also beautiful, hyper-intelligent, and sensuous, and she makes it possible for an alternative, threesome lifestyle to blossom. But on another level, Cruz' isn't just a character in a movie about a menage a trois. She can also be seen as a character that represents the creative spirit that haunts artists. Cruz, points at the violent ugly truth of authenticity and originality and how it stands fiercely in the face of boring and soul-killing conformism.
On the basic level, the movie is like a dream, a vacation, a re-evaluation of life-goals. And always vusually and aurally pleasing. It presents the war between societal norms and the real necessities of people in as neat and engaging a way as possible.
There is a scene that is most memorable. Cruz's Maria Elena reacts to the end of a love affair. It's a shrieking of pain that pierces the heart of all those who encounter it. In a sense, that is the blues. And it is one of the several combined reasons that this movie is unforgettable.

Gake no ue no Ponyo 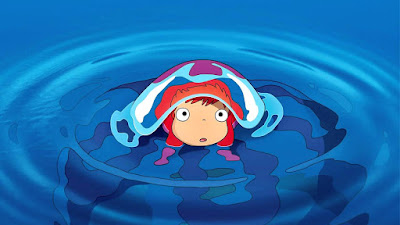 Written and directed by Hayao Miyazaki
Produced by Toshio Suzuki
Cinematography by Atsushi Okui
Editing by Hayao Miyazaki and Takeshi Seyama
Art direction by Noboru Yoshida
Music by Joe Hisaishi
Animation direction by  Katsuya Kondô
Color design by Michiyo Yasuda
Along with, Majo no takkyûbin (AKA Kiki's Delivery Service) (1989), this is one of Miyazaki's best. Wonderful because of how it wanders through the fantastic, the tragic, the romantic, the humorous, and the heroic. Over and over again, you are trying to figure out what kind of movie you are watching, even 'til the end. The rewards along the way are multi-faceted, touching and splendid.
Allegedly, this is Miyazaki's take on "The Little Mermaid" story, and certainly there a plot points that correlate. The title translates from Japanese to "Ponyo of the cliffs".